﻿Competitive Advantage﻿
ITO (Indium tin oxide) is today’s industry standard for producing transparent conductive electrodes (TCEs) for touch sensors. This ceramic film is sputtered in a high-temperature vacuum onto either a glass substrate or polymer base film.  Due to its high processing costs and significant performance limitations, many companies in the touch sensor ecosystem are actively developing alternative technologies.   Silver nanowires (AgNWs) have emerged as a leading candidate to replace ITO film due to its low cost (both in materials and in processing) and design versatility, extending to larger or flexible devices.

Innova’s Innlay™ TCE technology platform stands out as an unrivaled ITO replacement for its simplicity and versatility, which underpins:


Table 1 below compares Innova Innlay™ TCE technology vs. ITO film and other emerging ITO replacement technologies. It is unrivaled in its benefits across the spectrum of cost-performance considerations. 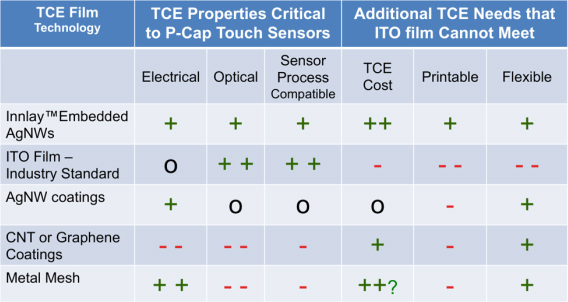 ﻿The difference is the structure at the surface﻿

Another testimony to the simplicity of Innlay™ TCE technology is it’s stack structure. As you can in Figure 4 below, ITO Film requires at least 5-6 different film layers to manage optical and mechanical performance.  Meanwhile, Innova’s Innlay™ TCE films simply consist of a single base plastic film with Ag nanowires embedded into the surface. It requires no additional optical or mechanical layers.